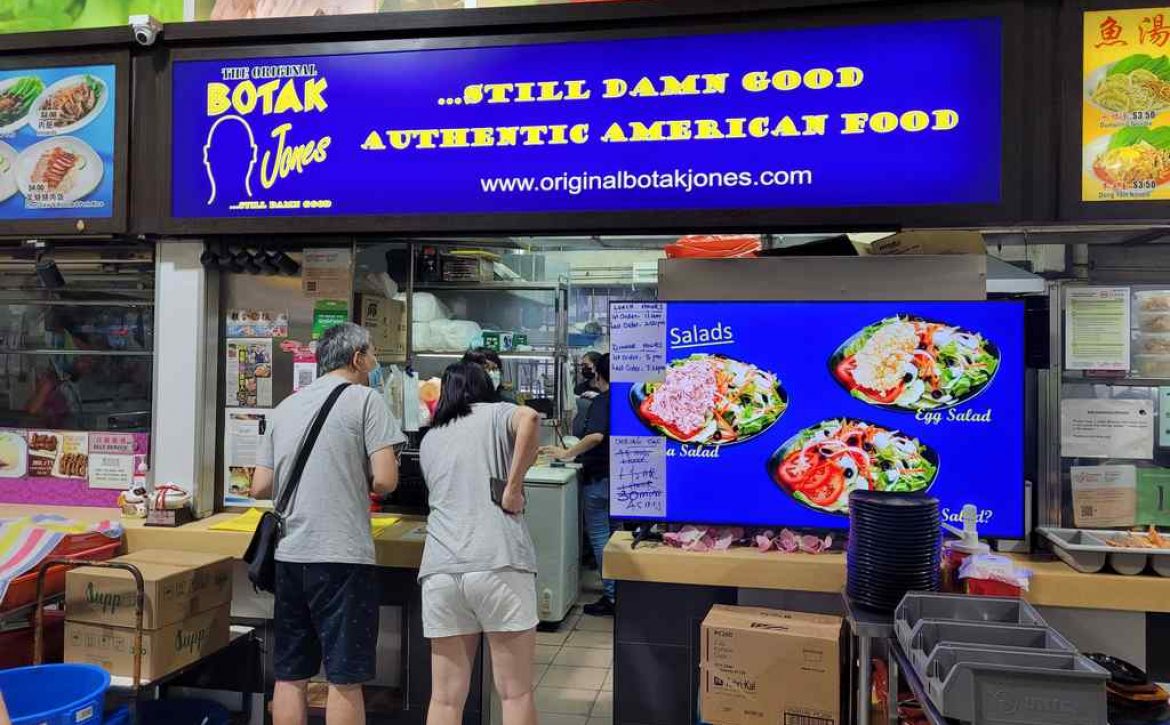 Lets check out Original Botak Jones with a first time ever, a takeaway dine-out. Botak Jones is quite a classic household name in the Singapore western-grill scene. At its core is an American-style western grill joint founded by Mr Bernard ‘Bernie’ Utchenik, 68 serving authentic American-sized portions right here on our shores.

The Return Of Mr Bern

Original Botak Jones is a return of the old-time western favourite or the same brand. You might go down memory lane where we first dined at Botak Jones at their Ang Mo Kio Ave 5 outlet over a decade ago. Back then, the western food scene was simpler with fewer completion.

History has it that the chain expanded rapidly in the mid-2000s. But after Mr Bern sold his shares to the franchise in 2013, it was well-known in the foodie scene that brand was soon plagued with issues food quality and small portions which saw the rapid decline of the brand, and the closure of the brand’s final outlet around 2017.

Moreover, Original Botak Jones is tad like Botak Jones “rebooted”. Here, you see the return of old time American classics, like Burgers and their signature Cajun chicken and Cajun fries. Interestingly, they are back at the food center which one of the chain franchises used to operate from to, abuet, from a different store unit. SINGAPORE – Since Western food stall The Original Botak Jones opened in Telok Blangah two weeks ago, the response has been overwhelming for the brand’s founder Bernie Utchenik and his wife Faudziah Mohd Ali.

Queues snake all hours of the day, often past the stall’s two-hour break at 3pm. Mr Utchenik, 68, says in amazement: “How the hell did we touch people so deeply that we still have a queue during a pandemic? I’m astounded.”

Delivery and pre-orders have been put on hold till the crowd stabilises, says the Detroit-born Singaporean, who started Botak Jones back in 2003 in Tuas.

The brand is best known for its hearty American comfort food served in generous portions.

The menu, printed on bright yellow paper in casual Comic Sans font with quirky descriptions, features bestsellers such as Cajun chicken (from $7.50) and fish and chips (from $8). More premium dishes include Norwegian salmon fillet ($18.50) and rosemary lamb chops (from $22.50).

Mr Utchenik has been getting requests for the return of his “labour-intensive” stuffed jalapenos and intends to add new items to the menu. INTERVIEW: Botak Jones’ founder Bernie on why working in F&B is an “addiction”

SINGAPORE – “It’s an addiction,” laughed Bernie Utchenik of the food and beverage industry, “in the sense that it’s a ‘terrible’ occupation.”

“You work harder than anybody [who is not in the F&B industry] could even think. You definitely put in hours that are outlandish. You miss all the holidays, birthdays, things like that.”

Utchenik, who turns 69 this year, is the man who opened Botak Jones in 2003, the popular Western food stall chain with large portions and unique offerings. After leaving Botak Jones, he started another chain called Big Bern’s American Grill, with outlets at Timbre+ and Gluttons Bay (they also had an outlet at Toa Payoh in 2017), before closing it down earlier this year.

Today, he has re-opened Botak Jones under the name “The Original Botak Jones”, at a coffee shop at 118 Depot Lane, with many favourites returning to the menu such as his fish and chips, chicken gumbo soup, and cheese-topped cajun chicken.

On why F&B is an addiction, Utchenik had this to say. “There are very few things, outside of performing on stage or F&B, that give you a very immediate response to what you’re doing. I’ve been fortunate enough to experience that both on stage and in the kitchen. That touches you in a way few things can, so you tend to want that again. It’s a high that you keep getting in.”

Performing on stage? Utchenik is a man of many talents, it seems.

He used to stay in Malaysia, where he got to know a dear friend who performed at the same pub that he did. When Utchenik moved to Singapore (he was in the oil industry then), his friend, who had also moved here, called him up on stage. “Oh my gumbo babies, come up here and sing a song with me!” his friend, who has passed on, would say. That’s how he started singing in Singapore.

Utchenik’s venture into the food business started with a group of close friends he had made in the oil industry.

“I thought, at that time, I was getting on in years. But I actually in my 40s,” he chuckled. “And we were always talking about what we would do if we weren’t working in the oil field. One of the things was, we would like to bring the real food that we grew up with here, where people haven’t really experienced it.”

In 1996, that seed germinated into a place called Bernie’s, which was located opposite Changi Prison. Utchenik soon grew it to three outlets, and eventually ran the business full-time.

After trying out another venture at Boat Quay in 1999, he finally came up with his brainchild — Botak Jones.

“I don’t know why I came up with the name, outside of the fact that I’m a botak,” smiled Utchenik as he pointed at his bald pate. “But I thought that Jones is such a Western name. And it has other meanings, like if you have a ‘jones’ for something, you’ve got a need for it.”

As a result, Botak Jones has both local and Western influences in the name. “Plus you want people to jones for the food, good food.” 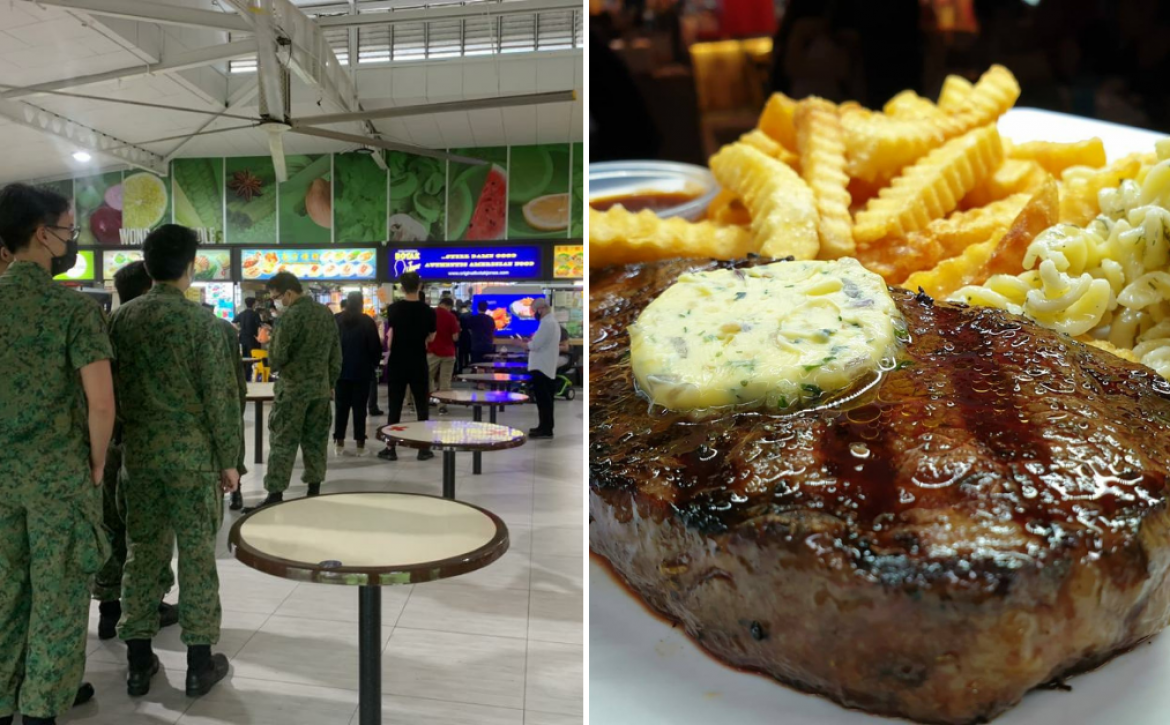 The Original Botak Jones has reopened in one of the same locations. Opened again on 14th June 2021, the western eatery is located in Yue Hua Eating House at 118 Depot Lane in Bukit Merah. The highly anticipated opening was very well-received. On the first day of the opening, the waiting time was approximately one and a half hours. The Original Botak Jones Has Just Reopened – Is It Halal?

If you’ve clicked on this article, you’d probably already be familiar with the name Botak Jones, a once-thriving coffee shop Western chain, or Big Bern’s American Grill, a one of a kind halal food truck at Timbre+ serving Southern Louisiana cuisine which shuttered in April due to the Covid-19 pandemic. Well, you’ll be glad to know that the man behind the famous Western food grill, Muslim-revert Bernie Utchenik, and his wife Zee Faudziah Utchenik have reopened Botak Jones with a new name; The Original Botak Jones.

Leveraging on the popularity of the (literally) original Botak Jones which had already left the market, he decided to revive the business which he used to own while giving it a new name. Although the stall is located in an ulu industrial canteen at 118 Depot Lane, they’re already met with long queues and food was even gone by 3pm on their first day! That’s how long foodies waited – and love – the food at Botak Jones which has certainly made a name for itself. Fans will notice the few changes in their menu, as they not only have come up with a change in their name – the reopening came along with a revamped menu to anticipate?

One of their signature dishes that’s making a comeback is definitely the U-CRAZY-WHAT?! burger ($24.50) consisting of 450 grams of stacked beef alone. If you’re thinking crazy, that’s right. They’re giving you crazy with this huge challenge of finishing the burger. Other stuff on buns includes the Cajun Chicken Burger ($7.50) and Black Pepper Chicken Burger ($7.50). Each burger comes with sliced cheese and lettuce, but you can also add on any toppings from turkey bacon to sauteed onion. 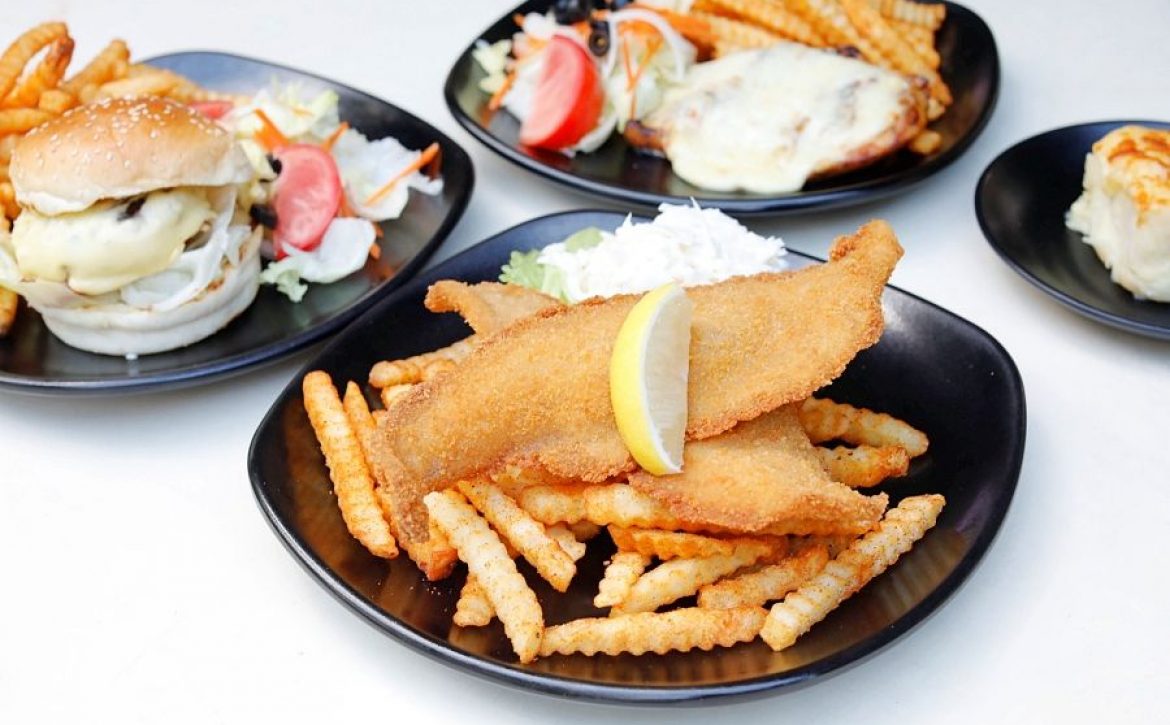 Botak Jones is back to Depot Lane in a Yue Hua Eating House – a kopitiam in the middle of an industrial estate, and now renamed as “The Original Botak Jones” (There are a few famous stalls here too, such as Wong Kee Noodle.)

There is this sense of nostalgia, for people who grew up having Botak Jones are probably in their 30s and 40s – from teenagers then to perhaps parents with kids now.

Botak Jones known for its burgers and Western food such as Cajun Chicken and Fish & Chips, had more than 10 outlets in Singapore during its hey days.

It was a regular haunt for its affordable Western dishes with big portions. There weren’t that many burger places in Singapore a decade ago as well.

I recall it was an inexpensive alternative when I wanted a meal near Orchard Road, with meals at their makeshift tables at Youth Park (now who remembers that?)

It is owned by Bernard Utchenik, an American-turned-Singaporean, who is really better known as “Botak Jones” (“Botak” means “bald” in Malay.)

His food has never really left us though, with two Big Bern’s outlets at Timbre+ and Gluttons Bay, though both outlets have closed in 2021.

When it comes to affordable, generously-portioned Western food, most people would immediately think of Big Bern’s American Grill and Botak Jones — both of which were founded by Bernard Utchenik, better known as Bernie.

Well, Big Bern’s American Grill may have closed its Timbre+ and Gluttons Bay outlets a few months back and Botak Jones has also shuttered all its outlets, but Bernard will be making a comeback with new stall The Original Botak Jones on June 14.

The new outlet will be located at Yue Hua Eating House at 118 Depot Lane, he announced in a Facebook update on Thursday (June 10).

Bernard, 69, also shared a picture of the new outlet’s signboard, which sports the iconic Botak Jones logo — an outline of a bald man’s head.